For the last  several months we’ve been talking about the distinct possibility of a period of foreign equity outperformance that investors would be remiss to miss. Indeed, it may be hard to contemplate tilting one’s portfolio in favor of foreign markets after such a great run in domestic stocks. But it’s also important to remember the drivers of relative performance differentials and how those things might be evolving. At the risk of oversimplifying, relative performance trends between US stocks and foreign stocks can really be boiled down to just a few items: money supply growth, economic growth prospects and credit spread trends. In the below charts we will examine each fundamental variable (plotted with the red line on the left axis) and compare it to the relative performance of the MSCI EAFE Index vs the MSCI USA Index (plotted with the blue line on the right axis).

First off, let’s take a look at money supply trends. In this illustration I’m using the relative year-over-year growth rates of Eurozone M1 compared to US M1. We use M1 instead of M2 because it has a higher correlation with relative performance trends in the stock market.Here we observe a persistent deterioration of Euro M1 growth compared to US M1 growth from 2015 through 2019. That is, credit creation was much weaker in the Eurozone than in the US over that period. No surprise there given the disarray in the European banking system. However, in the middle of 2019 something changed. Eurozone M1 growth started to outpace US M1 growth. Several months later EAFE stocks started to perform better than US stocks. Should this money supply dynamic continue we would expect EAFE stocks to continue to outperform US stocks.

Now let’s switch gears to the growth dynamics between Europe and the US. Here again, we are not comparing the nominal level, but rather the relative level since the relative trends are more highly correlated with relative stock market performance. In this model I’m comparing manufacturing PMI new orders between Germany and the United States. I use new manufacturing orders because they are a leading indicator of economic growth and I compare Germany to the US because Germany is both a leading indicator of European growth as well as the growth engine of Europe. Our simple model of relative growth trends is showing us that after an almost five-year long period of US growth outpacing German growth, German growth started to outperform on a relative basis in the middle of 2019. Sure, it was from a low base, but the relative growth trend is far more important to the stock market than the base level of growth. Consequently, EAFE stocks started to outperform US stocks  just several months after the German new orders PMI bottomed relative to US new orders.

So here we have relative trends in money supply, growth prospects and credit all pointing to a period of relative outperformance of foreign stocks compared to US stocks. That’s great, but as we showed here several weeks ago, if foreign stocks start to outperform US stocks, will many investors even participate? From the looks of it, no. Investors in equity ETFs are allocated 85% to US focused funds and only 15% to foreign focused funds. The MSCI World benchmark, on the other hand, has a 60%:40% allocation between the US and foreign markets. That means that US investors are approximately 25% underweight foreign stocks and as such are exposed to missing the upside of foreign markets if the fundamental trends explained here persist. 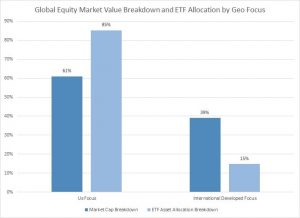