Why Coronavirus is Scary for Financial Markets

As we write, US stocks are down about 1.6% on the day, foreign developed market stocks are down 1.8%, and emerging market stocks are down about 2.4%. This type of corrective action did not really come as a surprise to us. Indeed just two weeks ago we wrote that New All-time Highs on Declining Breadth is Reason for Caution and our recent quarterly slide deck we went even deeper into highlighting the extraordinary level of euphoric sentiment among investors, which is typically only seen just before corrected phases begin. Stocks were ripe for risk off period, all we needed was a catalyst, which is never known ahead of time.

As it turns out, the catalyst (at least for this first leg down) has been the rapid spread of the coronavirus. China, being at the epicenter, is obviously the most acutely affected by the spread of the virus. As dangerous as the virus is, we believe financial markets face a larger risk from the impending economic slowdown the virus will create due to the massive quarantine effort of China underway. Incoming data suggests that so far the lethalness and contagiousness of the conoravirus appears less than the SARS outbreak 17 years ago. This is great news from a public health standpoint.

The massive quarantine of China is another issue. So far the Chinese government has quarantined 45 million people, or about 3.5% of the population. This would be like the US quarantining the state Georgia. What’s more, many manufactured goods are either produced or transported through the quarantined Hubei province, raising obvious questions about how effectively supply chains will function while the quarantine is underway. Finally, the number of countries halting inbound and outbound flights to China is growing by the day. The short-term ramifications on Chinese growth are large enough to pay attention to. In our view, markets are doing just that.

The first chart below shows the YTD performance of the China CSI 300 ETF compared to emerging markets more broadly. So far this year Chinese stocks are down 11% while EMs in general are down about 6.5%. For comparison sake, the S&P 500 is flat YTD. 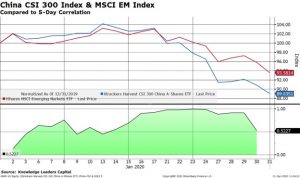 The RMB is also feeling the heat. When the Chinese economy slows, the RMB generally depreciates relative to the US dollar. Over the 4th quarter of 2019 the RMB appreciated by about 5% vs the USD on the back of the trade deal with the US. Recently, the offshore RMB has depreciated by about 1.5% to the all-important 7.0 level.

While we take note of the depreciation of the RMB, it is neither surprising nor that large in magnitude given the circumstances. More troubling is the signal we are getting from copper prices, which track the level of the RMB with precision. Currently, the price of copper has not only broken to the lowest level since 2016, but also suggests that a RMB of 7.2 – the trough level we saw during the trade war – is well within the range of possibilities.

Now here is the real issue. If the RMB were to trade back to 7.2, it would be consistent with and indicative of a fairly significant down leg in Chinese economic growth. The chart below shows the relationship between the Chinese manufacturing PMI and the offshore RMB. A RMB of 7.2 would put the PMI back well below the important 50 mark. If a slowdown does materialize – and we don’t know why it wouldn’t given the significant quarantine efforts both within and outside of China – then financial markets are right to reprice risk assets around this slower growth regime. At some point, the repricing may offer a compelling opportunity if our indicators showing investor greed start to display investor fear, but we aren’t there yet.