Given the surge in unemployment claims over the last month the US unemployment rate is expected to rise to 16% in April from just 4.4% in March. Shocking as that number is, we have no problem with that forecast. But for some reason economists surveyed by Bloomberg expect average hourly earnings to grow at +3.3% year-over-year in April compared to 3.1% in March, and they expect average weekly hours of 33.6 in April compared to 34.2 in March.

I do wonder how it can be that the unemployment rate will shoot up to a post-war high and yet those employees who were not furloughed or laid off will, in aggregate, have the near the same level of hours and earnings as before. After all, Google search trends for the terms “pay cut” and “hours cut” have reached an all-time high in recent weeks. 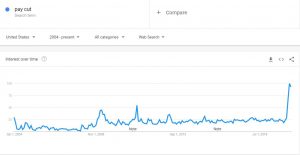 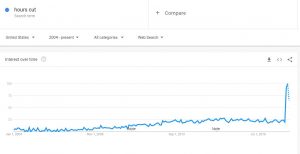 Moreover, the idea that average hourly earnings will actually increase sequentially in April for those employees who did keep their jobs is wholly inconsistent with consumer survey data. For example, when I compare University of Michigan Consumer Expectations to average hourly earnings then it looks like we should be expecting something closer to just 2.5% year-over-year growth. 2.5% year-over-year growth would equate to a month-over-month decline of -0.78%. That would be the largest month-over-month decline on record…by a mile..and I suspect there is even downside to that figure as well given Google search trends. 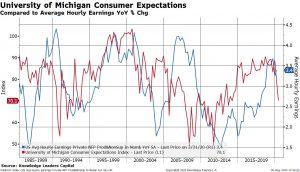 Now, in fairness, the University of Michigan consumer survey appears to be more in line with the estimated decline in average weekly hours. But the Google search trends shown above still suggests a rather large decline in hours worked. 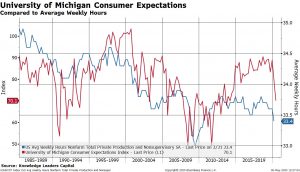 Putting these items together – overall employment times wages times and hours worked – the nominal income generated from employment in April is likely to be fully 14% lower than year ago levels…nearly 3 orders of magnitude worse than the worst readings of 2009. 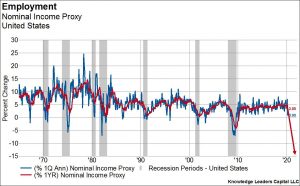