The Path to Average Equity Returns in the 2020s is Challenged

The returns of the 2009-2020 bull market were nothing short of extraordinary. From the 2009 low in the S&P 500 to the 2020 high, stocks gained a massive 488%, or nearly 18% on an annualized basis. This compares to an average nominal price return for US stocks of about 5.5% annualized going all the way back to 1896, or 6.7% in the post-war period. So, the recent bull market produced average annual returns more than 3x that of normal. Even if we measure the S&P 500’s full cycle performance from the low in 2009 through the low in 2020, that still gives us an annualized return of 14.5%, or nearly three times the annual average return through history.

Going forward, can this type of high return environment be replicated? To answer that question it helps to understand the sources of equity appreciation from the previous cycle and ask whether those things are likely to be repeated during this cycle.

Let’s start with decomposing earnings per share into its piece parts. 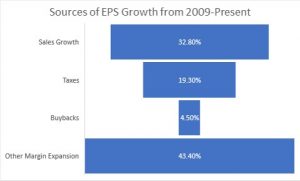 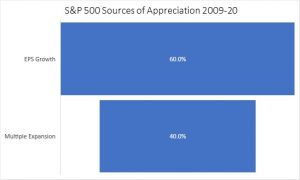 In the next chart we put all this together into a breakdown the S&P 500’s total appreciation into the granular piece parts. 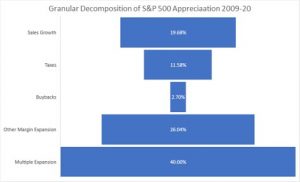 With that behind us, we need to analyze each component of share price appreciation from the last cycle to in order to judge whether it is likely to be repeated this next cycle. 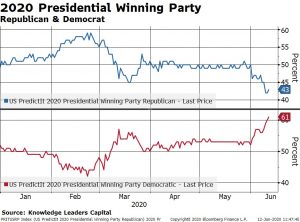 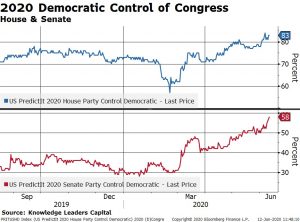 Finally, multiple expansion. At the beginning of the last market cycle the S&P 500 was sporting a forward PE of 10x. Back in March, the PE only reached a nadir of 17x and is already back to 25x. Could the forward multiple double from the March low and reach 34x? Anything is possible (see negative oil prices). But even with Fed asset purchases (which empirically are accretive to multiples), we would be hard pressed to count on multiples topping those from the 1999-2000 period by a wide margin.

In sum, the last market cycle was a unique one in terms of the aggregate stock price appreciation as well as its sources. Some of those sources were clearly one offs (tax cuts), while others may have simply reached their logical limits (interest rates, wages as a share of output). In the end, we find lots of reasons to expect lower EPS growth and less multiple expansion during this market cycle than last. At the very least, this means we have to re-calibrate our return assumptions moving forward and not expect a repeat of the 2009-2020 cycle. At worst, it could mean that achieving even average equity returns over the coming years could be a challenge.