When the QQQs Make You Queasy

Here we are in the dog days of summer, and the hot weather is not the only thing making us a little queasy. The darling stock market group since 2011, the Nasdaq 100 stock index, has soared a cool 20% this year and well into all-time high territory. Indeed, the height is making us queasy from vertigo.

It wouldn’t be such a big deal if it weren’t for the nearly 30% outperformance of the Nasdaq 100 compared to the average US large cap stock so far this year. That’s right, while precious few (mostly) tech-related stocks are up about 20%, the equal weighted S&P 500 is down 8%.

Outperformance of tech vs the broad market is nothing new. It’s been happening since 2002. What is out of the ordinary currently is the magnitude of recent outperformance that pushed the relative ratio between the Nasdaq 100 and the equal weight S&P 500 to fully 27% above it’s 200-day moving average. This is…troubling…since the last time it happened was back in 1999. 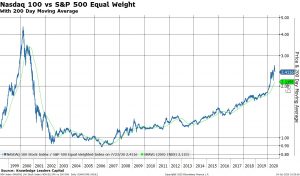 But it doesn’t end there. The Nasdaq 100 is even extended relative to its own trend. Currently, the index 20% above its own 200-day moving average. This is a scenario that has happened only twice in the last 20 years: once in 2009 and once in 2003. Granted, both of those were notable periods in that the economy was emerging from recessions, just like today. But, in both cases the Nasdaq 100 ended up dropping back below that 200-day average over the months that followed. In other words, it would fit nicely with history for the Nasdaq 100 to take a breather here, and possibly give back some of those tremendous year-to-date gains. 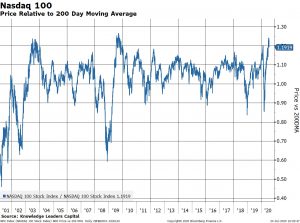 Another thing we find troubling is that much of the recent move in these high-flyers is due to multiple expansion rather than earnings or cash flow growth. That is, investors have been paying up for the potential of future growth as opposed to what cash flows are anticipated to be over the next 12 months.

We can see this clearly in the next chart showing enterprise value to EBITDA for the Nasdaq 100. It has expanded by 25% this year. That’s right, EV to EBITDA has expanded by 25% while these stocks are “only” up 20%. This implies that forward EBITDA expectations have actually contracted by 5%, which they have. 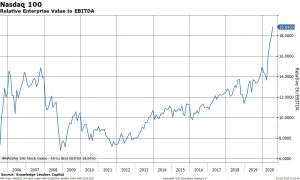 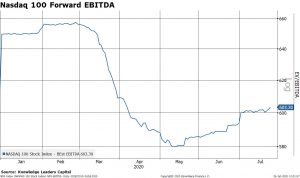 So, this obviously begs the question as to why would someone place a higher multiple on an earnings stream which is seemingly declining, highly uncertain, and likely much more volatile than in the pre-COVID world? Look no further than negative real interest rates. When real rates are negative and falling, there is zero opportunity cost to speculating on the growthiest area of the market, even if that growth is only realized in out years. 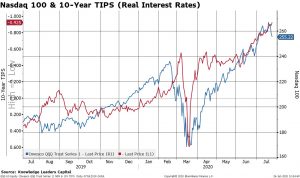 There is one thing though that could throw a wrench into this relationship, and that is the US dollar. If a new downtrend emerges – which in all fairness has not yet happened, but the probabilities seem to be rising – it would be anathema for the relative performance of the Nasdaq 100 vs the average stock. 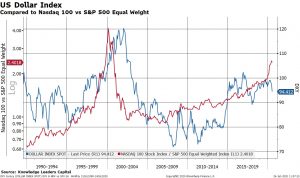 The mechanism at work in this falling US dollar scenario is rising inflation expectations, in part due to imported inflation. As you can see below, as inflation expectations fall (blue line rising), the Nasdaq 100 outperforms (red line rising). This opposite is also true. The reason is that in a disinflation, tech is pretty much the only area that experiences a rising top line because it’s the growthiest sector in the economy. When even moderate inflation emerges, other companies are more easily able to grow top line sales. It’s the convergence of the relative sales growth that helps the average stock outperform tech in a moderate inflation scenario. 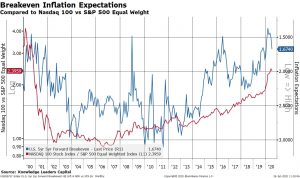 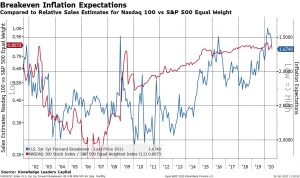 So, we find ourselves at an interesting juncture here. The tech theme is overbought and extended and the entire outperformance has been predicated on rising multiples. This raises the likelihood of a moderate setback in this area in the months ahead. Fair enough. What would be more concerning, and not just cause some queasiness but actual nausea, would be if the US dollar truly and fully establishes a downtrend.

A continued relative expansion in the US dollar money supply vs the Eurozone money supply would certainly help get that US dollar downtrend established and help cause some moderate inflation at the same time. As Father Friedman is famous for saying, “inflation is always and everywhere a monetary phenomenon”. That thesis will be tested in the coming quarters and years. 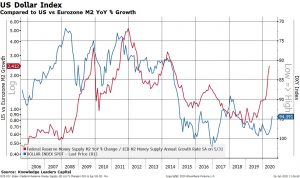 As of 6/30/20 QQQ was not held in the Knowledge Leaders Strategy.