Financials Can’t Catch a Break, and What it Means for the Market

The bank stocks are at it again as they make another new 52-week relative performance low compared to the broad market.  It’s a perennial issue. Over the last year the KBW Bank Index, an index of 24 of the largest US banks, has underperformed the S&P 500 by 30%. Over the last 10 years, the banks have returned just 51% as much as the broad market. 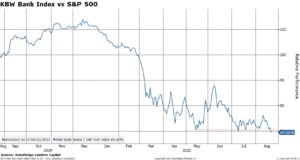 You’d think at some point these stocks could catch a break, but that would be to ignore the fundamental headwinds facing these institutions. If we use the yield curve as a proxy for bank profit margins, it’s no surprise that the banks have underperformed by such a large degree. Indeed, with a 10Y-2Y US Treasury spread at just 48bps, the margin generated by borrowing short and lending long has all but evaporated. The below chart plots the 10-2 yield curve spread in red against the relative performance of the KBW Bank Index vs the S&P 500. 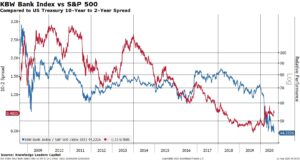 And then there is the fact that for the last many number of years the real rate of interest has been falling like a stone. With 10-year real risk-free rates now at -1%, how exactly do lending institutions in aggregate generate substantially positive real returns? That is a rhetorical question, obviously, because the whole point of financial repression is to favor creditors over lenders in an effort to reduce the debt burden. 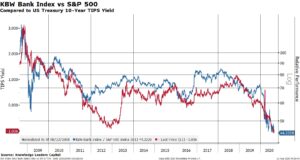 More importantly, though, is the impact of bank underperformance on the broader market. It’s often thought that when the banks underperform by a large degree it spells disaster for the equity market as a whole. That isn’t exactly true, although forward performance for the S&P 500 is pretty weak when banks hit new 1-year relative lows.

The headwinds facing the financials may, however, very much impede “value” related strategies from gaining much traction. Last week, we highlighted how “value” as an investment style is still challenged despite a blip of outperformance in August. Part of the reason is that the weighting of financials in most “value” related indexes is rather extreme (see table below). So, in order for “value” to work in earnest, we really need banks to outperform. 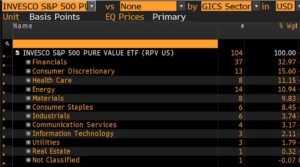 Along those lines is a theoretical question about whether there remains any risk premia embedded in “value” stocks or if their performance profile is mostly just a function of the macro environment. In other words, if “value” can only outperform when real interest rates rise and financials outperform, have the idiosyncratic features of “value” that made it a winning strategy in decades past evaporated? The last chart below shows the relative performance of “pure value” stocks vs the S&P 500 overlaid on the 10-year TIPS yield. In the bottom panel of the chart is the correlation between the two series. Until 2009, when financial repression started in earnest, there was basically no positive long-term correlation between real rates and “value” performance. Since 2009, that correlation has been highly positive, which suggests that real interest rates are a (the?) defining feature of modern-day “value” performance trends. 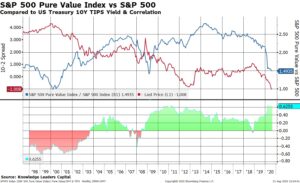