Two weeks ago, I wrote about the rising likelihood of corrective action in the equity markets, which was a follow up to our mid-quarter update. In both pieces we detailed some disturbing indications that suggested US stocks, especially large US stocks, had gotten quite a bit ahead of themselves. Since then, we’ve seen the S&P 500 sell off by 8% and the NASDAQ correct by 11%. So, the question now is how much pain do we have to endure before this correction is over? To answer that question, let’s revisit some of those divergences we highlighted a few weeks back.

First off is the relationship between the VIX and stocks. The VIX had been rising while stocks were also rising, which was a rather unique setup that had a history of portending bad things for the equity markets. Well, that was the case again as stocks have sold off to the close the gap that had developed with the VIX. There remains a rather wide divergence however, and we’ve actually seen the VIX fall as equities have fallen (again a rather odd string of events). Nonetheless, the containment of the VIX (so far) is a positive development insofar as the options market is pricing in less volatility than it was a few weeks back. 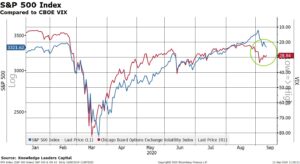 Next, we will hit on stock market breadth. In August, the equity markets pushed higher, but on obviously fewer and fewer individual names participating in that action. Markets don’t need expanding breadth to rally, but it certainly helps. In this case, markets could no longer be held up by the handful of names making new highs, and so they fell. Since the equity market peak on September 2nd, we’ve seen market breadth and equity prices move down in lock step, which is more normal than what we saw in August. What we’d like to see to mark the end of this corrective phase is for breadth to actually improve amid flat to lower equity prices. We’re not there yet. 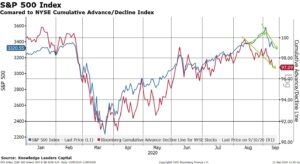 In a similar fashion to market breadth, August was a time of complete disconnect between equities and fixed income. Equities were racing higher while high yield spreads were flat to trending higher. Equities have since corrected while high yield spreads have remained pinned. This is undoubtedly a good sign since it suggests equity stress is not bleeding into credit. Overall, the message from credit (so far) is that this is a garden variety correction rather than a repeat of February and March 2020.

In late-August we started noticing that the US dollar weakness had kind of petered out. From March to August USD weakness was coincident to equity strength as the signal and effect of both assets represented one of reflation. The problem in late August, which is still the problem today, is that short bets on the USD were extreme, which is typically a sign of near-term trend exhaustion in USD weakness. Furthermore, we haven’t received additional policy stimulus from the Fed or on the fiscal side strong enough to overwhelm the extreme positioning and push the USD lower still. That positioning is still extremely short and no policy action appears on the horizon has us mindful of the potential for a period of USD strength still to come. If that scenario comes to pass, then the equity selloff would probably have more to go. 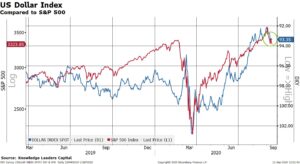 And finally, here is this. The option speculation index compares bullish and bearish options trades placed at the market open. It still remains at “crazy” elevated levels, suggesting the recent equity weakness is yet to dent the speculative frenzy in equity options. In “normal” times, which this is not one, we’d expect indicators of speculation to cool off before equity corrections are completed. So far that hasn’t been the case. 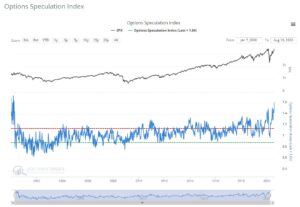 All in all, what we’ve experienced since the August disconnect is equities selling off to catch down to the message of many indicators we track. So far so good. The relative strength in credit is clearly an important plus in our work, but we are still waiting on positive/reflationary signals from both asset markets and policy makers. We are also waiting on some of the speculative excess in the USD and options market to cool. So the combined message to us is, “were closer, but not there yet.”