A Pop in “Value”, but Still Not a Sustainable “Value” Rotation

Monday of this week stood out as the single largest day of outperformance of the value style relative to the growth style in 25 years. Many companies that are strongly associated with the value style, such as financials and energy companies, were up in excess of 15% on the day. Moves like the one we saw on Monday cause every manager to question portfolio positioning and take a deeper dive into whether Monday’s action was the start of the oft-mentioned “value” rotation that many market participants have been waiting for. At the end of the day though, for value as a style to outperform the market in general, the financial companies need to become market leadership. This is because financials compose somewhere between 30%-40% of traditional value indexes. As the reader can see in chart 2, the relative performance of financials and the Pure Value index is basically the same thing. So go the financials, so go the value products. 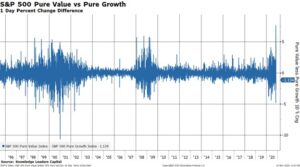 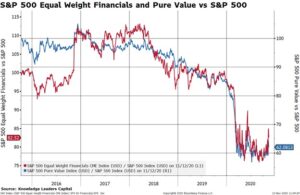 The question is whether market participants suddenly came to the conclusion on Monday that the fundamentals for financials have changed in the intermediate to longer-term time frame? There is no better indicator for the fundamentals of financials in general than the yield curve, or the spread between long and short-term interest rates. Banks tend to borrow at a shorter maturity and lend out at a longer maturity, so as the yield curve bear steepens (long rates rise faster than short rates), it tends to be quite good for bank profitability. Well, we did have a pretty significant bear steepening over the last few months, but given Monday’s explosion higher in the bank stocks, we may need more for the banks to continue to outperform. This is where things get tricky. 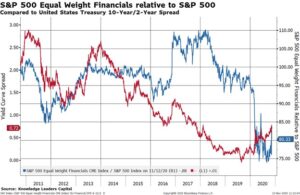 In the next chart below we overlay the run rate of COVID-19 infections on top of the 10Y US Treasury yield (red line, left inverted axis). The breakout in COVID-19 cases suggests the 10Y bond yield has room to move from 90bps to 50bps. This is because the worsening of the COVID-19 outbreak is likely to bring about Lockdown 2.0 for many states and localities as soon as this weekend. Lockdowns are harmful to both growth and inflation expectations, which are necessary components for a steeper yield curve. So, instead of an immediately steeper curve, what seems more plausible for the next several months is actually a bull flattening (long rates falling faster than short rates), which is anathema for bank profits. Remember, even though a vaccine may start being distributed as soon as mid-December, the high-risk community will not be inoculated until late-January (2 doses of the vaccine separated by 2 weeks, followed by another week to develop antibodies, plus not everyone will be able to start their dosages right away). 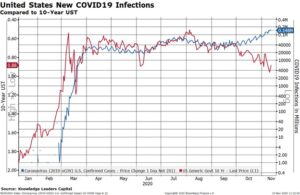 Even though the banks may not have the fundamental backdrop to become sustainable market leadership in the immediate future, that isn’t true of other value oriented groups like industrials, materials and even small cap stocks. As the reader can see, these groups have broken away from the Pure Value index and have been outperforming the market since April. These groups have characteristics of value companies (relatively lower valuations, more cyclical, higher debt loads, etc.), but aren’t  nearly as affected by the yield curve as the financials, and thus the value indexes in general. So, it’s paid to be bullish of value, just not the value indexes. We don’t think Monday’s market action changed that just yet. 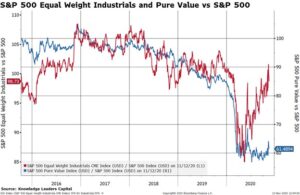 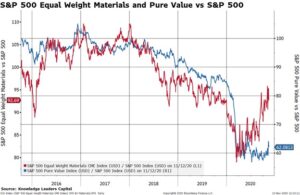 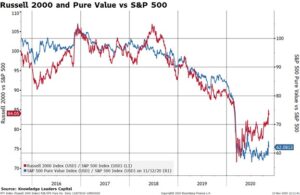