Gold: Testing Patience But Toeing the Line (For Now)

Since early August the “barbarous relic” has corrected some 9% while many other assets have ascended to all-time highs. This has no doubt caused a bit of consternation for holders of gold who have been using the metal not as a hedge, but as a capital appreciation vehicle unto itself. For what it’s worth, we think it has potential to be both, but that is a topic for another day. In any case, gold is clearly testing folk’s patience here and causing some to throw in the towel, including, most recently, one of the largest banks.

And yet, there are reasons to be optimistic that gold hasn’t lost its luster just yet. This post focuses on market-based observations that point to gold hanging on to its mojo for the time being.

Let’s start with pure old price. Gold has been tracing out a sideways wedge consolidation for the last several months. Importantly, the “line in the sand” at about $1850 has been defended multiple times and so far it has held. A break below this seemingly important barrier would likely usher in a deeper correction, but we aren’t there yet. 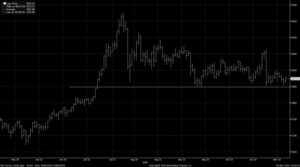 Interestingly, gold also has some catching up to to relative to other asset classes of relation. For example, 10-year TIPS yields (red line, left inverted axis) have come down by 9bps in recent weeks while gold has traded sideways. TIPS and gold are related insofar as lower TIPS yields mean the opportunity cost for holding zero yielding assets is relatively less.

Similarly, bitcoin (AKA digital gold), has exploded to new highs while while gold has traded sideways to down. Gold is related to bitcoin insofar as they are both assets of scarcity. Bitcoin leads gold prices by about 1 month, so the elevation of bitcoin back into the stratosphere should portend good things for the shiny metal if history is a guide. 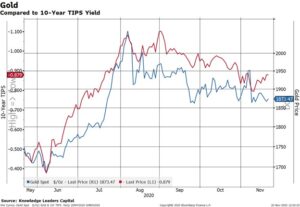 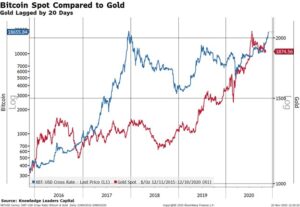 We are also at the beginning of the strongest part of the year for gold in terms of seasonality – November through February. 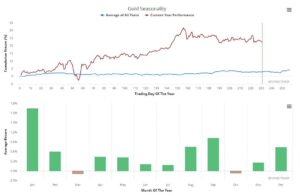 Moving onto fund flows, it appears many investors are giving up on gold here. Indeed, cumulative outflows from the GLD ETF over the last 1 month period (3rd panel in the chart below) are in extreme territory. Fund outflows were only greater in late 2016, when gold was at the very end of a multi-year downtrend. High levels of outflows are often indicative of capitulation by weak holders. 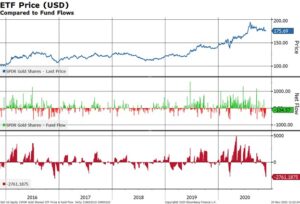 What is odd about the GLD fund flows is that they stand in stark contrast to those of two of the most popular gold miner ETFs, the GDX (the gold mining majors) and the GDXJ (the gold mining juniors). Both of those ETFs have seen cumulative inflows over the previous 1 month period even though the corrections in those ETFs have been much deeper than that of gold. That investors have been willing to hold ETFs with 2-4x leverage to the gold price is indicative of more upbeat sentiment on the gold space in general, in our view. 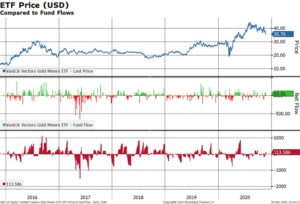 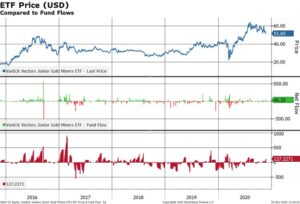 Similarly, we also observe that the relative performance of GDXJ vs GDX (white line in chart below) has been steady even though gold itself (yellow line) has corrected. The junior miners have a higher beta to the price of gold than do the majors, so they tend to underperform the majors when gold itself sells off. So far they are not doing so, which again can be read as a positive development from a positioning/sentiment standpoint. 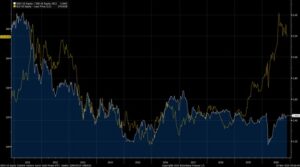 Speaking of sentiment toward gold, it was off the charts back in August, hence the need to digest that emotional blowoff through a consolidation/correction. Sentiment has now corrected back towards the middle of the range, which is where it tends to spend most of its time during gold bull markets. We wouldn’t rate sentiment a major positive at this juncture, but it certainly isn’t the headwind it has been for much of 2020. 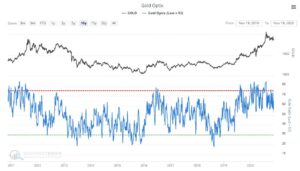 The long-term fundamental case for gold is still in play by our work. Tactical, market-based indicators are becoming more supportive as well. What is missing is a catalyst, of which there are many possibilities. This is 2020 after all.