Breakeven Inflation is Breaking Out

Inflation expectations as priced by the Treasury market are hitting 18 month highs just now. As the reader can see, inflation expectations across all treasury maturities are at cycle highs. This is happening coincident with growing expectations for the $908bn bipartisan stimulus deal and widespread expectations that the Fed will ease in some additional way at their next meeting 12 days from now. That these two events are anticipated by the market does pose some near-term downside risk for inflation expectations, since there is now room for disappointment. Even still, keeping the long game in mind is useful. Indeed, there exist multiple structural catalysts for inflationary pressure that haven’t existed in quite some time: 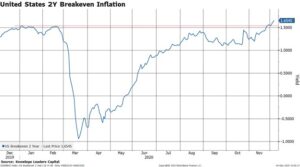 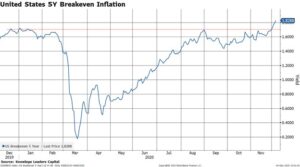 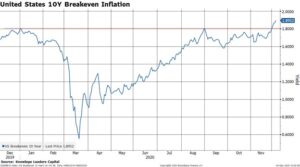 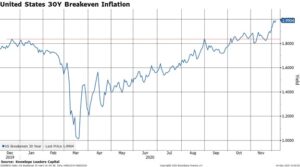 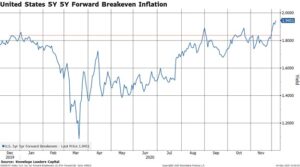 Within the equity market, there are clear implications to a structural change in inflation expectations. The clearest one may be the outperformance of cyclical vs defensive stocks. In the next chart below I compare the materials sector vs the consumer staples sector (red line) and overlay 10Y inflation expectations (blue line). The bottom panel displays the correlation between the two series in green. If breakevens continue to march higher, it’s clear one wants a more cyclical tilt towards their portfolio. 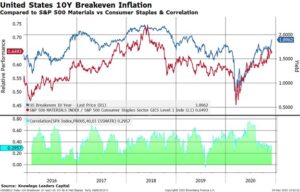 On the other hand, cyclicality does not equal value. This is apparent in the chart below in which I plot the relative performance of Pure Value vs Pure Growth stocks overlaid on inflation expectations. The correlation here is much, much less than the preceding chart. As I have argued multiple times in this blog, value as a style is highly dependent on the yield curve steepening. Because the Fed has telegraphed an inclination to push against back against higher long rates (yield curve control, forward guidance, etc.), a material and sustained steepening of the yield curve (i.e. one that lasts through the first half of 2021) doesn’t seem like a particularly high probability bet. At least, the bet on cyclical vs defensive is a higher probability and one that will grow if the inflationary catalysts above play out. 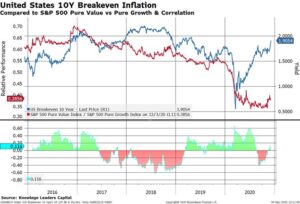