LVMH Moët Hennessy Louis Vuitton is a leading global luxury brands group. Made up of 75 product “maisons,” or houses, including wine and spirits, fashion and leather goods, perfumes and cosmetics, watches and jewelry, and other retail including Paris department store Le Bon Marché, the group was formed in 1987 in Paris. In 2021, LVMH kicked off the new year with a highly anticipated acquisition of U.S.-based Tiffany & Co.

While LVMH is independently publicly traded, the conglomerate is majority held by the Christian Dior Group, and French billionaire Bernard Arnault is Chairman and CEO of both companies. In an interview with the Financial Times, Arnault has called his mother, who wore Dior perfume, an early influence on his career, not only for making him take piano lessons, but also for her “fascination for Dior.”

Today LVMH believes its decentralized model is key to its success, empowering each luxury brand to stay close to its customers and ensuring responsiveness and fast, effective decisionmaking, an approach LVMH believes sustains employee motivation as well. Arnault frequently articulates the group’s three fundamental values: one, be creative and innovative; two, deliver excellence; and three, cultivate an entrepreneurial spirit. Recently, in response to the pandemic, the group has emphasized its long-standing commitments to the environment, sustainability and inclusion. In the future, LVMH intends to further pursue digitization, which it sees as the path to enriching customer experience both online and in person. 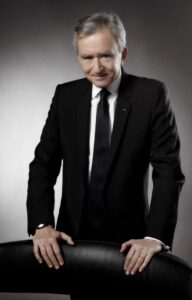 As of 12/31/20 LVMH and Christian Dior were not held in the Knowledge Leaders Strategy.