Why Rates Could Still Drift Lower, But Will Ultimately Go Higher

10 year Treasury rates peaked at the end of March at 1.74% after having risen from low of just 0.56% back in the summer of 2020. Now, the rate stands at 1.57% even as economic data continues to come in smoking hot and policy remains incredibly accommodative. In times like this, we have to ask ourselves whether this is a correction within a longer-term uptrend in rates or if we’re currently witnessing peak rates for the cycle. The question is of vital importance to asset allocators of all stripes since a falling/rising rate environment informs equity factor performance ranging from growth/value to small/large to domestic/foreign. Our read of the data suggests we may yet have more to go on the downside for rates, but that this is a correction within a longer-term uptrend.

Why could rates still fall from here even though consumer prices are soaring, housing is ripping, employment is improving, etc.? It really comes down to expectations. The Fed is telling us they will continue buying bonds for the foreseeable future and that they will not raise rates through 2023. But the bond market, through February and May, was acting like the Fed would not make good on that promise. We know this by observing market expectations for the Fed Funds rate in December 2023. In early April the market had fully priced two rate increases, or 50bps of total rate hikes, by December 2023 (100-99.5=.5).

Similarly, the eurodollar market – which is a close cousin to the Fed Funds market – was pricing more than four rate increases, or 120bps of total rate hikes (100-98.8=1.2). 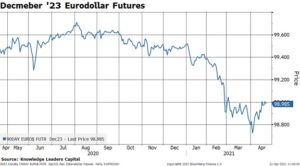 These niches of the bond market had gotten ahead of themselves in thinking the Fed would not make good on their promise. Usually, fighting the Fed is not a winning strategy, but this is exactly what the Fed Funds market and eurodollar market were doing. So, as the Fed reiterated its intention to keep Fed Funds at 0% through 2023, the market needed to price out the rate increases it had priced in. This required a bit of a retracement in longer-term bond yields.

Not only that, but the yield on US 10-year bonds got to relative extremes vs both Japanese and German bonds even after taking into account currency hedging costs. In fact, even after hedging currency risk, Japanese and European investors could earn more in US Treasuries relative to their own domestic bonds than had been the case since 2015. This created a natural bid for risk free US paper. 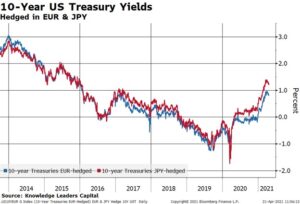 These factors suggest a bit more of a retracement in longer term Treasuries, but significant progress has been made in tamping down the market’s expectations for overnight rate hikes in 2023.

That said, there are forces at play that generally suggest higher long rates as time passes. Policy is one such force. Inflation and growth are others.

On the policy front, its useful to observe the relationship between Fed asset purchases and the 10 year Treasury yield. As Fed assets (blue line) increase, longer-term bond yields yields (red line) typically follow. It may sound counterintuitive that rates would rise even as the Fed was buying bonds hand over fist. But ,asset purchases tend to increase inflation and growth expectations in the bond market, causing longer-term rates to rise. The Fed hasn’t even stated when they may taper purchases, let alone stop buying bonds altogether. So, Fed balance sheet growth should remain a force for higher rates until such time as asset purchases cease. 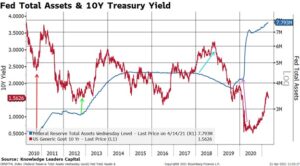 Similarly, we should expect the yield curve to continue to steepen. Below we overlay the 10-year minus 2-year yield spread (blue line) on the Fed Funds rate (red line). As the reader can see, there exists a strong negative relationship between these series. That is, the yield curve typically steepens until such time as the Fed starts to raise overnight rates. Unless something changes with Fed policy, that won’t happen for another 20 months. 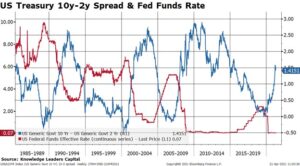 Next, we have inflation and growth, both of which are ripping higher. The first chart shows CPI (blue line) compared to 10-year rates (red line). The second chart shows the ISM manufacturing index (blue line) compared to 10-year rates (red line). To the extent measures of inflation and growth such as these continue to remain at high levels, expectations for a sustainably higher inflation and growth environment will start to build. This is our base case and should keep pressure on longer rates through increasing rate hike expectations in years 2024 and beyond. 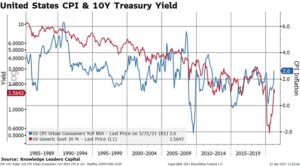 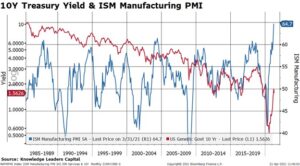 So in sum, we can reasonably expect 10-year rates to possibly come down a little more as foreigners sweep up relatively cheap bonds and as rate hike expectations get priced out of 2023. But, policy, inflation, and growth remain tailwinds for longer-term bond yields to continue to march higher. We’ll have more to say about what this means for certain areas of the equity market in future posts.