Last week we wrote how interest rates may have room to come down a bit before ultimately heading higher later this year and into next year. This line of thinking was reinforced this week at the Fed’s meeting release and press conference. Powel’s messaging/guidance was squarely unchanged in suggesting 1) an asset purchase taper is not imminent and 2) rates will remain at zero through 2023.

Now, that guidance can always change, primarily if inflation (and particularly core PCE) gets well above 2% and remains there for many months or quarters. But, we aren’t there yet. In fact core PCE released just today came in at 1.8%. All this means that direct and indirect market wagers that the Fed will raise rates sooner than late 2023 are literally “fighting the Fed”.

And, just to be clear, market participants are still betting that the Fed will be well into liftoff by the end of 2023 despite the Fed’s continued messaging to the contrary. For example, the Fed Funds market still expects 50bps of rate hikes (or 2 rate hikes of 25bps each) by the end of 2023.This is derived by subtracting 99.53 from 100 in the chart below. 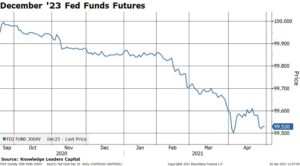 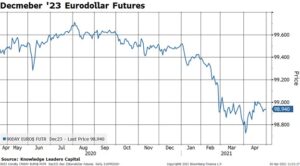 Even if the market is fighting the Fed on these particular trades, does it mean the broader reflation trade (i.e. the one that correlates nicely with a rising 10-year yield and steepening yield curve) is also offsides? We don’t necessarily think so. 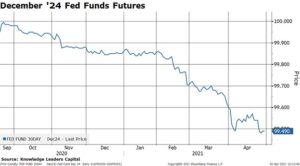 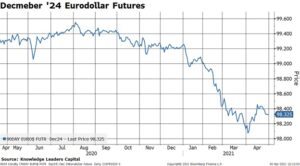 Secondly, there is nothing set in stone about the relationship between the yield curve and reflation trades. We have an excellent example from the 2002-2003 period. During this period the Fed was not hiking rates and the 10Y-2Y Treasury curve (red line in the charts below) generally steepened. Yet, typical reflation trades like value vs growth and copper vs gold (blue lines in charts below) showed basically zero correlation to the steepening in the curve even though one would have expected those trades to be highly positively correlated. 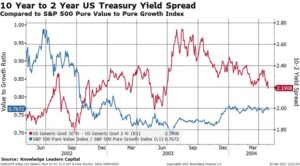 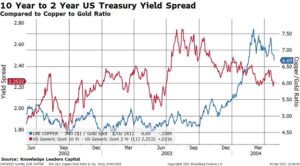 All this is to say that yes, the market may be fighting the Fed currently and expecting the Fed to tighten sooner rather than later. When those expectations change – and they will indeed change if the Fed keeps its word – it will require the market to stop expecting as many rate hikes in 2023 and instead expect more rate hikes in 2024. This could put some continued modest pressure on longer-term rates. But, we need to be careful about expecting that to derail reflation trades. 1) the pressure on rates should be modest, so curve flattening should also be modest and 2) as we see from the 2002-2003 example, there can be prolonged periods of time when “reflation” trades “should” do one thing, but actually do another.