Breaking Down the Employment Report and the Market’s Reaction

Today the US employment report for April was released and it took the markets by surprise. Estimates were for net job gains of 1 million. Instead, the US economy added 218K private sector jobs. This compares to 708K private sector jobs in March. Indeed, this was the biggest payroll “miss” in recent memory.

Digging into the details reveals some interesting tidbits as to what went wrong with employment in April, and what it could mean for future reports. Let’s start with an overall summary.

As stated, private payrolls in April rise by a net 218K vs 708K in March. The decline in job additions between March and April was spread across both the goods and services sectors. The goods producing sector actually saw jobs decline by 16K vs +166K in March while services jobs “only” grew by 234K vs 542K in March.

What was it in the goods sector that either didn’t add jobs in April or actually saw jobs decline? There were two culprits. The first one was construction, which added no jobs in April after adding 100K in March. This raises a question as to whether April was a one-off or whether the pace of new construction is starting to ebb after a very strong few quarters. Secondly, the auto manufacturing sector saw job declines of 27K. This one can very probably be attributed to semiconductor chip shortages causing slowdowns in auto production. So, the auto job losses probably are a one-off. 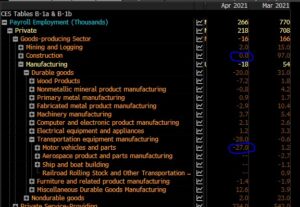 Now, let’s dig into services. Trade, transport, and utilities saw job declines of 81K vs gains of 99K in March. When we look to the source of the job losses, we find that nearly all of it was due to a decline in courier jobs. This is important, because it shows that while some areas will see job gains with the reopening, some other jobs that were created only as a function of the pandemic (i.e. food delivery) are likely to see continued declines. 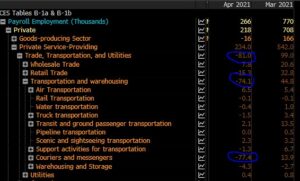 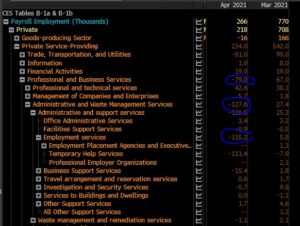 Now let’s move on to education and health care. Education jobs fell by 20K in April vs a gain of 54K in March. With schools reopening in the Fall, it’s hard to see continued weakness in education employment. Health care is another story. Fewer COVID patients in hospitals mean a lower need for skilled medical care and fewer staff at rehab facilities. As the pandemic abates, we could very well see health care as a continued source of job losses.

Finally, we have leisure and hospitality. In March this was the big bright spot, and it was again in April. The US added 331K leisure jobs, most of which were in accommodation and food service. Clearly, this is all reopening related, and we should continue to see gains in this area.

This payroll report was interesting because it highlighted how the reopening may not go in a straight line. While reopening undoubtedly helps restaurant and hotel workers, it may actually hurt other folks who found jobs delivering things, secured temp jobs, or gained employment at a hospital or rehab facility. We could easily see more of the same in future reports, which could mean a longer slog back to full employment. At the very least, it will give the Fed pause before taking action to taper bond purchases.