For the second month in a row, the US payroll employment report has come in below expectations. The miss this month was not quite as bad as the miss last month, but was still notable. The market was expecting 675K new jobs, but only 559K were added.

Nearly all of the jobs added were in the leisure & hospitality and education categories. This is unsurprising given re-openings will affect those sectors particularly acutely. But, for the second month in a row we also saw fairly weak numbers out of both construction and manufacturing. Construction jobs fell by 20K while manufacturing jobs only rose by 23K after a 32K decline in April. Furthermore, the labor force participation rate fell by a tenth of a percent to 61.6% when the market expected it to rise to 61.8%. 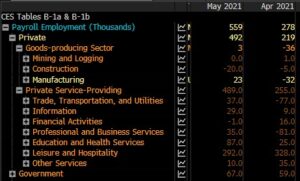 Granted, the payroll report wasn’t exactly weak. But, but it wasn’t really that strong either. Not only did it miss headline expectations, but it lacked broadness, was outright weak in an important cyclical area (i.e. construction), and people actually dropped out of the labor force at a time when vast job openings and reduced unemployment benefits would have suggested the opposite.

It’s not surprising, then, to hear Cleveland Fed President Mester this morning say things like:

“Economy has more progress to make on hiring”

“Still have further progress to make on labor market”

All that followed NY Fed President Williams earlier in the day saying:

“The economy has improved and I think it’s on a good trajectory. But to my mind, we’re still quite a ways off from reaching this substantial further progress, you know, we’re really looking for”

The message from the employment report and the Fed speakers is pretty clear: the labor market has not improved to a degree warranting the Fed to begin its tapering process, and the Fed will be patient to wait for such a time.

Since the Fed has told market participants it will telegraph the start of tapering by many months, we believe an announcement of tapering is unlikely to come before Jackson Hole in August or at the September FOMC meeting. Since there will be a lag between the announcement of tapering and the start of tapering, actual tapering would start at the beginning of 2022. The tapering process itself would last roughly 12 months, or throughout 2022. Then, the Fed would wait at least two quarters to begin raising rates. This would put the first rate hike in the back half of 2023. We would therefore expect two 0.25% rate hikes in 2023, and certainly no more than three 0.25% rate hikes.

What is the market expecting?

Interestingly, the Fed Funds market is still expecting more rate hikes than our baseline projection, which is based on what the Fed is saying and actual incoming data. The Fed Funds market still expects 0.2% of rate hikes in 2022, or about an 80% chance of a 0.25% rate hike in 2022. We think this expectation is off the mark given the relentlessness of Fed speakers suggesting patience, as well as the probable timeline for tapering.

The takeaway is that the market still needs to push out in time its expectations for the first rate hike, and that will keep pressure on both the short end of the yield curve as well as the longer end. In essence, don’t expect 2Y or 10Y rates to back up much from here because the market still expects a rate hike in 2022, which is unlikely to materialize. 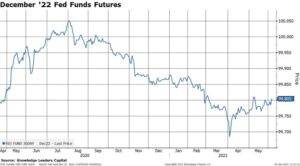 What does this mean for markets?

If Fed tapering won’t begin until 2022 and the first rate hike won’t take place until the back half of 2023, then that means there is a long runway for the cyclical/value trade to continue to press ahead. As can be seen in the final chart, over the last 12 years the relative performance of the materials sector vs the tech sector has closely tracked the direction of the 2-year yield, with a 2-year lag. When the 2-year has been rising (blue line on right inverted axis), materials have underperformed tech (red line on the left axis). Now, however, the 2 year yield has been falling for 2 years, and is set to remain near zero for quite a bit longer. This portends that the rotation into materials/cyclicals/value from tech is set to run for several more years. 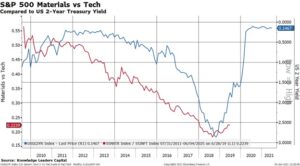