Is the Cyclical Trade Over or Just Pausing?

This week the Federal Reserve made its first hawkish surprise to monetary policy since December 2018. As opposed to December 2018, when the Fed actually raised rates for the final time in the cycle, the Fed this week signaled rate increases potentially starting in 24 months. It was a surprise nonetheless. The question is whether it will completely change the market’s tone and derail the cyclical reflation trade or if this is more of a tightening scare that will get digested in time.

Certainly, over the last two days the market has voted in favor of the former. Indeed, 2 year yields have soared from 14bps to 25bps while 10 year yields have fallen from 157bps to 144bps, equating to yield curve flattening of 24bps in just a few days. That is an enormous flattening in a few days that would suggest the Fed has every intention of absolutely crushing inflation, and with it the cyclical outperformance that has persisted for fifteen months. Meanwhile, Fed Funds futures have started to price in not just two rate increases for 2023 (as the Feds famous Dot Plot suggest), but even more and sooner rate increases. For example, December 2022 Fed Funds futures are pricing in two full rate hikes by that time while December 2023 Fed Funds futures are pricing in nearly five rate increase. In other words, the Fed took a hawkish tone by starting to project rate hikes in 24 months time, and the market took that tone change and started to price in a tightening cycle that would begin in just 12 months time, resulting in two rate hikes in 2022 and another three in 2023. 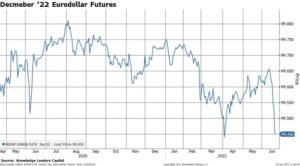 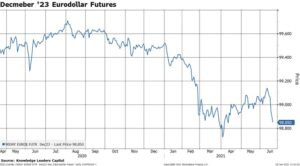 Is that really what the Fed was signaling on Wednesday? If they planned to hike twice in 2022 and three times in 2023, wouldn’t the Dot Plot at least have shown one hike for 2022? Secondly, wouldn’t the Fed have addressed the fact that in order to hike rates they would first need to 1) announce tapering of asset purchases, 2) actually taper, and 3) wait some time after tapering ends? Instead, the Fed was mum on tapering, leaving the impression that, as expected, they would announce tapering at Jackson Hole or in September and then commence tapering in December. Could it be that the market has gotten ahead of itself in thinking the Fed is now single mindedly focused on dismantling inflation when the unemployment rate + underemployment rate is still at 10%?

For that we turn to a few indicators measuring the cyclical impulse in markets. Below we show the ratio of high beta to low beta stocks, the ratio of materials to consumer staples stocks, and the copper to gold ratio. Each of these things tracks the Fed’s policy trajectory as well as the evolution of inflation. Each of these indicators remains in a clear uptrend with an upward slowing exponential smoothing line. This is different that the 2018 hawkish surprise in which the market, by these cyclical indicators, started sniffing out a “too tight” Fed and falling inflation in the second quarter of 2018. That may well happen, but we are not there yet according to these indicators. Instead, what we may have had is a Fed Freakout moment where market expectations need to be “managed”, as usual. If that is the case then we should expect the cyclical trade to resume after some more wringing out has occurred. Time will tell. 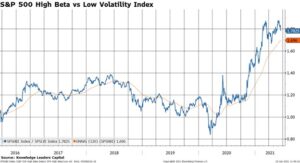 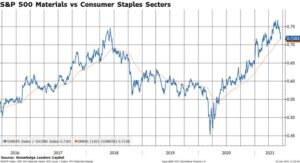 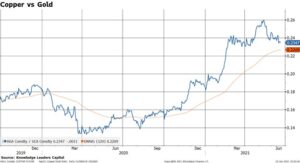