Here’s Why the Yield Curve is Likely to Re-steepen, and What that Means for Stocks

Last week the 10-year to 2-year US Treasury yield curve spread narrowed from 133bps to 119bps in just three trading days. That 14bps curve flattening was a 2 standard deviation event going back to1990, so it’s safe to say moves like we saw last week are rare. In conjunction with the curve flattening, the cyclical/reflation trade was reversed in its tracks with banks and commodity related businesses selling off while long duration growth stocks caught a bid. Some, but not all of that has been reversed this week. The question is whether we are due for more of the same in the coming days/weeks/months or whether this was an adoration within a longer-term steepening trend in the yield curve? We wrote last week that that latter seemed more plausible since none of our indicators that point to turns in the economic or rates cycle have budged. In this post we’ll focus more on the bond market and why, if anything, the curve is likely to unwind the flattening action that occurred last week.

The composition of the move in the yield curve is significant. 2-year yields rose from 16bps to 25bps while 10-year yield fell more modestly from 149bps to 144bps. Currently, the 2-year sits even higher at 27bps while 10s are also higher at 154bps. The action in the yield curve last wek was the market interpreting the Fed’s monetary policy announcement as a hawkish surprise that will cause shorter-term rates to rise. Rising short rates ultimately slow the economy and tamp down inflation, which is why longer-term yields fell. Therefore, in order to get more of the same from last week we would need to see the short end of the yield curve continue to march higher while longer-term rates remain constant or fall.

How likely is that scenario to play out? For that we must turn to the market’s expectations for Fed tightening and see how that lines up with actual Fed policy and Fed speak. The Fed Funds futures market, which is an excellent tool to determine where the market expects the Fed Funds rate to be in the future, now prices the Fed to have raised rates a little more than 25bps by December 2022. US Treasury forward rates suggests an even more aggressive outcome. The 1-month rate one year from now is 42bps, which actually implies more than one rate hike by this time next year and closer to two hikes by the end of 2022. 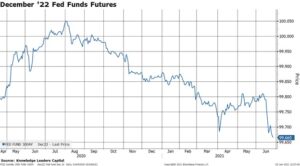 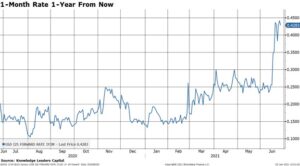 The issue here is that the bond market is expecting the Fed to hike rates at least once in 2022, but this expectation is inconsistent with the timing the Fed has offered on both the start of taper and the start of rate hikes. Based on the Fed’s policy and Fed speakers, we can reasonably infer the following as a baseline scenario for the Fed tightening cycle:

This baseline timing of rate hikes IS consistent with the Fed’s recently published Dot Plot, which suggested two rate hikes in 2023. The market, however, is ahead of the Fed. This presents three possible scenarios for the bond market.

Given that in two of three likely scenarios the yield curve is likely to re-steepen, we need to think about what that would mean for stocks. Keeping things simple, let’s focus on the how the yield curve impacts the relationship between value stocks and growth stocks. As the reader can see, a flattening yield curve (red line going down) is associated with growth outperformance (blue line going down) and vice versa. If we are for a re-steepening of the curve, then the mini value to growth rotation that has persisted for about a month should be temporary, and the runway for value outperformance could be quite long still since actual Fed tightening is likely to be far off in the future. 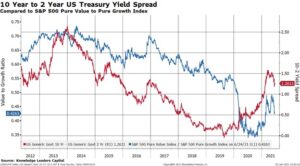