The ever-important payroll report came in ahead of expectations for June, but will ultimately do little to sway policy in toward the hawkish faction of the Federal Reserve Board. The headline non-farm payroll figure name in at 850K in June, ahead of expectations for 720K new jobs. But, we have to dig deeper into the numbers to get a better sense of “how” payrolls surprised to the upside. Indeed, private payroll additions were 662K for June, only 47K above expectations. The real “beat” was in public sector payrolls, specifically education, which registered 188K additions versus just 67K in May. Moreover, manufacturing payrolls only increased by 15K in June (a fairly anemic number even if affected by semiconductor shortages) and the bulk of private job creation was concentrated in retail and leisure & hospitality.

Now, there is nothing inherently wrong with adding jobs in public education, retail, or leisure & hospitality. Indeed these areas were some of the hardest hit with job cuts during the height of COVID lockdowns a year ago. We should thus see continued job growth in these areas. In fact, we NEED to see continued job growth in these areas to get back anywhere near pre-pandemic employment levels. What these areas are not, however, are high productivity sectors. That’s why, for example, average hourly earnings only increased by 0.3% MoM, which is broadly in line with monthly earnings increases from 2010-2019. Since inflation is running MUCH hotter than average hourly earnings, real average hourly earnings remain at basically the most negative levels on record. A wage/price spiral this is not – at least not yet. What it is more akin to is stagflation. 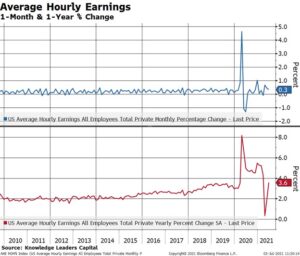 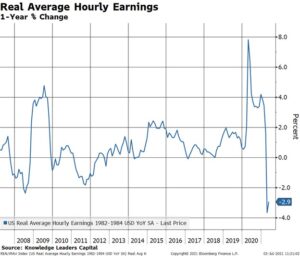 And then there is the unemployment rate, which actually ticked up to 5.9% when it was forecast to have fallen to 5.6%. This is entirely due to the labor force participation rate basically making no aggregate progress since March of 2020. 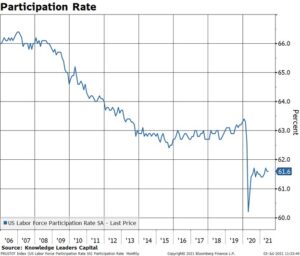 We don’t want to sound all “Debbie Downer” about the employment report. Anytime the economy adds 850K jobs in a month, it’s a good thing. It does, however, not really add to the case of the hawkish faction of the Fed. Indeed, this report does not constitute “substantial further progress” on employment, at least not by our reading of it. If our interpretation is shared by the Fed, then we shouldn’t expect this report to bring forward the Taper or rate hikes from the baseline scenario, outlined here. This may be why stocks, gold, silver, and bond prices are all up nicely on the day, while real 10Y rates head back toward the lowest levels of the past few months. The one missing element is that the 10Y to 2Y yield curve actually flattened by 1bps today since 10Y yields are down 3bps while the 2s are down only 2bps. Even still, if over the long weekend investors share our opinion that we have more to go before making “substantial further progress”, then we would fully expect the curve to re-steepen by way of the short end falling back down. That, as we have said in the past, would keep the cyclical/value trade intact for quite some time. 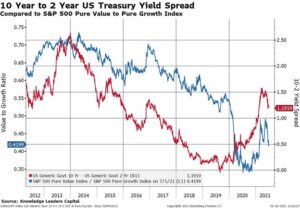