President Biden recently set a target for 50% of all vehicle sales in the US to be fully electric, plugin hybrid, or fuel cell by 2030. Assuming a modest 1% annual growth in new car sales, total new car sales in the US would be about 19M by 2030. This means that electric vehicle sales will rise from about 600K currently to roughly 9.5M over the next nine years, if the target is to be met. This hockey stick growth in EV sales raises the obvious question of how the raw material inputs into EVs and the supporting infrastructure will be sourced. Indeed, EVs contain about 4x the amount of copper as a combustion vehicle (183lbs vs 48lbs), to say nothing of the need for modernization of the electric grid or charging stations. EV batteries contain large amounts of nickel, cobalt, and lithium.

The object of this post is not to pinpoint the exact amount of copper or lithium that the EV industry will need over the next decade, since that is a moving target driven heavily by policy and technological innovations. Rather, it is to make the simple case that some of the companies that produce the materials needed for the transition to EVs specifically and green energy more broadly may be in a position to outperform the market for years to come. Other firms that produce these materials may be less well situated for full cycle outperformance.

Let’s start with copper miners. Capital expenditures for copper miners have been in structural decline since 2014. Clearly, the 2009-2014 period exhibited just a bit of exuberance among the miners as they behaved (and invested) like the Chinese infrastructure buildout would continue indefinitely. So, a major rethink of capex was definitely in the cards. But, capex is now down to 2005 levels among the largest publicly traded copper producers. 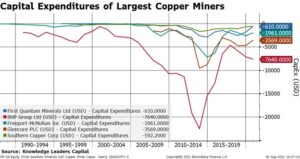 Furthermore, the largest three copper producers are, in aggregate, investing less in new capital expenditures than their depreciation expense. In other words, the asset base is shrinking. The obvious question is whether the asset base should be shrinking ahead of a major demand surge for the materials these companies produce? 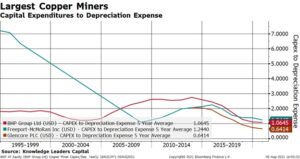 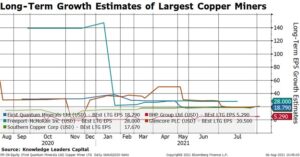 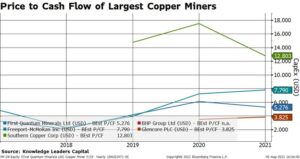 Finally, relative performance for the group looks to be turning. After underperforming the S&P 500 by 75% since 2011, the group has been in a sideways trend vs the index since 2015 and is finally starting to show signs of life. This of course makes sense since capacity has been hallowed out, growth is picking up, valuations are low, and the price of copper is going up. 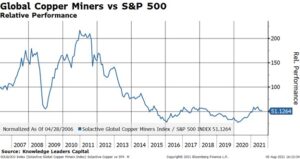 The situation isn’t the same among rare earth miners and other firms that produce cobalt. Here, capex hasn’t been in terminal decline, even if aggregate capex among these firms is still much less than $1bn combined. 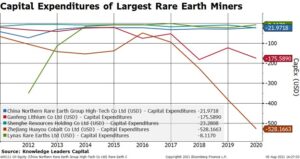 Valuations among the group look more like meme stock valuations than copper miner valuations, coming in between 45x and 75x cash flows. 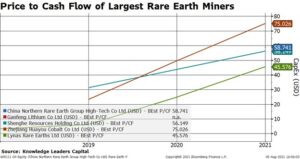 Relative performance trends have definitely improved for the rare earth and cobalt companies, however. After peaking out in 2011, the these companies underperformed the S&P 500 by 90% through 2015 and then have almost nothing on a relative basis until recently. Now, finally, these companies are starting to show signs of life, but the structural supports present among the copper miners are not as compelling for the rare earth and cobalt miners. In our view, one is playing for momentum in these stocks as opposed to compelling valuations and structural underinvestment. 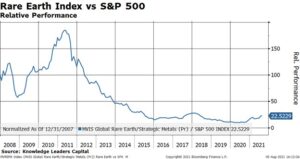 The takeaway here is two fold. First, there is clearly an unfolding opportunity to capitalize on the transition to EVs that is likely to play out around the world through the 2030s. Second, some stocks sport ideal setups to outperform from the transition due to massive underinvestment, low valuations, and a decade of being hated by investors. Other stocks may have much of the growth priced in, or at least the risk/reward isn’t as compelling. In any case, one exciting part of all this from an investment perspective is an opportunity to add growth to one’s portfolio other than through high valuation technology stocks. We suspect the green energy transition will be full of such opportunities for those willing to embrace out of consensus growth ideas.