Today at the annual Jackson Hole Economic Symposium, Federal Reserve Chairman Jerome Powell reiterated that the Fed is in no hurry to either taper asset purchases immediately or aggressively. Additionally he made crystal clear that even when the Fed does eventually start tapering asset purchases (likely November or December), it should not be taken as signaling interest rate hikes will follow on some preset course. Indeed, Fed Chairman Powell continues to lean into the idea that inflation is will prove to be transitory and so there is no rush to tighten policy, especially with the employment part of the mandate still far from being achieved.

This strong dovish guidance flies in the face of what many investors have been expecting, which was for the Fed to commence asset tapering sooner rather than later and for rate hikes to potentially commence in 2022 rather than the middle of 2023 or later. The reiteration of the more dovish Fed stance opens the door inflation expectations to turn back up, since the Fed is not so eager to front run rises in inflation with more restrictive policy. And, if inflation expectations turn back up (blue line), we could see a re-steepening of the yield curve (red line). 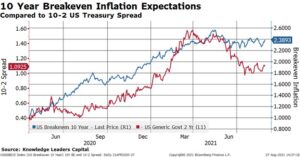 The shape of the yield curve has been highly influential recently in relative performance trends between various areas of the market. From last summer through May of this year, the steepening of the yield curve coincided with healthy outperformance of cyclical stocks. Since May, the flattening of the curve has coincided with more defensive (or at least high quality) leadership out of the tech and health care sectors. The logic goes, therefore, that a re-steepening of the curve should coincide with a shift back to cyclicals. Indeed, that shift may be in the early innings.

For example, the the more cyclical and smaller skewed S&P 500 equal weight index has started to outperform the S&P 500 again, right on queue with the yield curve re-steepening. 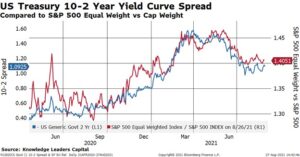 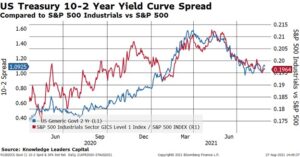 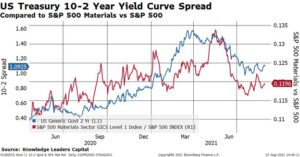 And, same goes for financial stocks. 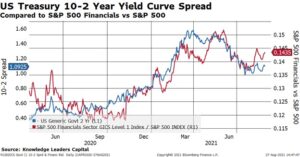 So, our take is a relatively simple one. If dovish Fed policy continues to look past “transitory” inflation and remains in no hurry to tighten policy, we may very well witness an un-rotation out of technology and back into cyclicals in the back half of 2021…and wouldn’t that be painful for those who chased tech late into its recent rally?