Evergrande is an Isolated China Issue, for Now

Earlier this week we saw some tremors in the equity markets with the largest single-day selloff in stocks in months. The likely China Evergrande debt default was “blamed” for the weakness, which was then promptly reversed as the week progressed. Questions remain, however, about the impact of Evergrande’s likely default on domestic Chinese and international markets. Some pundits have even gone as far as to say Evergrande is “China’s Lehman Brothers”. In our view, comparisons to Lehman Brothers are inaccurate and unhelpful, since Evergrande is much smaller and counterparty risks to an Evergrande default appear to be isolated, as we will show. That doesn’t necessarily mean, however, that stocks are out of hurricane season just yet.

When analyzing the broader impact of an Evergrande default on financial markets, perhaps the best place to look is in credit spreads and credit default swap (CDS) rates. If funding stress were brewing in the capital markets from Evergrande, we should see it appear in the credit markets first. What we do see, though, is credit spreads and CDS remaining at ultra-tight levels, suggesting limited knock-on effects of the likely Evergrande default.

For example, in the United States, investment grade credit spreads remain near the lows and barely budged with the equity market’s weakness early in the week. 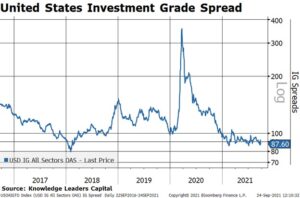 CDS among the largest US banks also remain tight and have barely moved on this week’s events. If these banks had substantial direct or indirect exposure to Evergrande, we would have expected CDS to rise markedly this week. 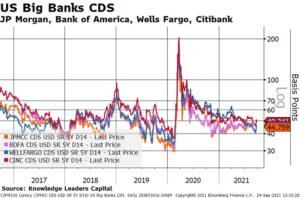 It’s the same story in Europe. Investment grade credit spreads remain near the tightest levels in years and large bank CDS show no signs of stress. The latter is of interest since European banks historically have much more exposure to China than US banks and some reportedly have direct exposure to Evergrande. 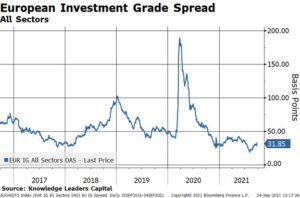 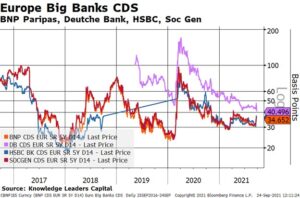 Where we are seeing at least some notable stress is in CDS on Chinese government bonds. This is of interest since China CDS trends to loosely correlate with the level of the CNY. If CDS widen a lot in China, we would expect a weakening cycle in the CNY to coincide. 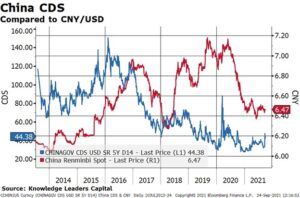 This matters because a weakening CNY either causes or coincides with widening credit spreads in the US, since a weaker CNY causes at least some demand destruction of US made products. 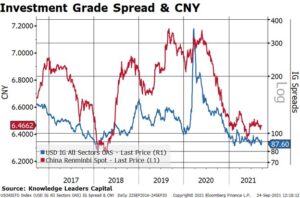 So, while the Evergrande saga continues, the capital markets outside of China appear to be taking things in stride. Even still, equities aren’t out of the woods just yet. For one, seasonality remains weak for the next several weeks. Secondly, grappling in Washington DC over the debt ceiling, a possible government shutdown, tax hikes from reconciliation, etc. remain a significant risk. And then there is the simple fact that market breadth continues to weaken notably. For how long can the equity market be held up by such narrow leadership? 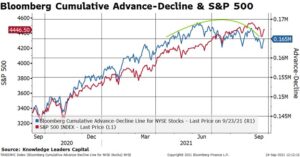 Note: as of 6/30/2021, JP Morgan and Bank of America were held in a Knowledge Leaders strategy. None of the other securities mentioned in this post were held.