Is Keurig Green Mountain (GMCR) About To Underperform By 35% (again)?

First thing first, Keurig Green Mountain (ticker:GMCR) is not a Knowledge Leader, which means as an investment team we don’t spend a lot of time delving into the intricate details of the stock. With that being said, however, occasionally we will go through our charts of Knowledge Followers in order to gain a better understanding for what is and what isn’t working in the overall stock market. It can be quite an illuminating exercise.  As we were going through the Knowledge Followers today, a major red flag arose when we came across GMCR in our proprietary point and figure charts.

GMCR is at a very precarious position. Relative to the MSCI All-Country World Index (ACWI), GMCR failed to break out of a very wide, long trading range at the end of 2014. It has subsequently ALREADY underperformed by 35% since it made a relative high last November. From a technical perspective, the stock is sitting right at a high-performance uptrend line that has been in placed since 2012. It previously successfully tested this uptrend line in 2013. However, given the recent failed break out, the probability that this line holds again has most likely shifted against GMCR. If this uptrend line does fail, then the nearest support level is at H, which would be a relative underperformance of the ACWI of 35%. If H doesn’t hold, then hold on to your hats because it is a long way until you reach O, where a narrow base formed in 2012.  The stock currently looks like it is in the beginning of a distribution phase wherein strong holders of GMCR are selling their shares to weaker holders. Only time will tell but the current technical set-up is not favorable for GMCR. Four months after our initial post, GMCR underperformed by 45% before recently outperforming by 7.5%. 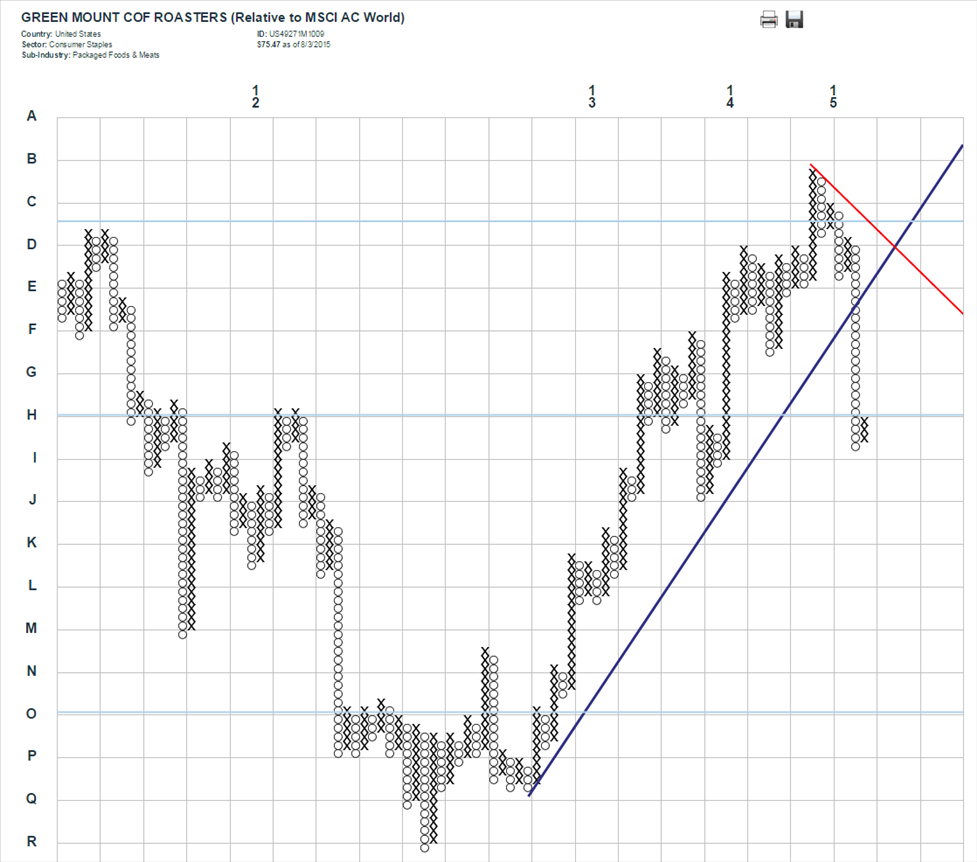