The template of 1929 and 1987 is coming into focus in recent trading days.

Let’s start with the 1929 crash. The Dow Jones Industrial Average began the week of October 5 with a slight gain, and then the rest of the week (October 6-9) were all down days as well. This first week down brought stocks to new intermediate lows that had held for several months. The next week, the DJIA opened up down on Monday, October 12 and traded down each day of the week. Then, bang, on October 19, 1929 we experienced a 20% waterfall decline, which carried into Tuesday. The whole 11-day episode erased 28.94% from the DJIA. 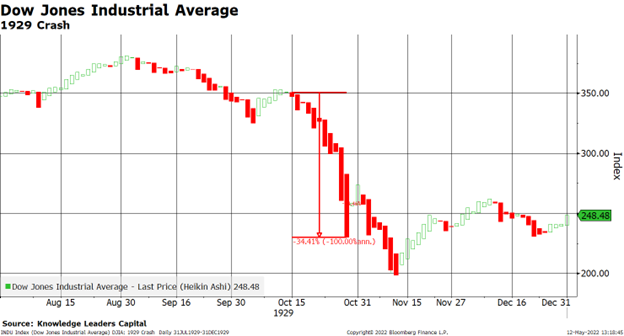 Turning to 1987, we can see some similar patterns. The week of October 14 began with a slight up day and then the rest of week was down. The following Monday, October 21 the DJIA started the week down and was down every day that week. Monday, October 21, 1987 took out the intermediate low that had been place for a few months. Then, on Monday, October 28, 1987, the DJIA fell almost 15% in a single session. That was followed by another 10.5% decline on Tuesday, October 29, 1987. Over the course of 10 days, the DJIA lost 34.41%.

This brings us to 2022 and the current state of affairs in the stock market. Wednesday, May 5, 2022 was the last up day for the DJIA. On Thursday and Friday the DJIA closed lower, taking out the intermediate lows of February/March. This week, stocks began down on Monday, May 9 and have been down all week. If Friday is a down day, it puts into focus the prospect that we could be on the precipice of a crash. So far, we are six days into the decline. If Friday is down, that would mark the seventh straight day down and set up a template for days eight and nine of this decline that could look awfully similar to prior crashes.

The good news here is that we are only down about 5% in this 7-day selloff, and there is still time for the template to break and/or for investors to take actions to protect capital. In the 1929 and 1987 episodes, the big down days came at the end of the move. So, if Friday is down, investors might consider attuning to the 1929 and 1987 template, understanding that 30+% declines can occur in as little as 10 days.