Macron Won, So Why Didn’t the Euro?

With France’s polls closing yesterday Emmanuel Macron will now serve a second consecutive term as the president of France, the first to do so since Jacques Chirac in 2002. Heading into the vote, Macron had an 80-90% chance of victory according to analysts, representing a smaller lead than when he faced Le Pen in the 2017 presidential election. Indeed, in April, Le Pen commanded nearly 50% in some polls. 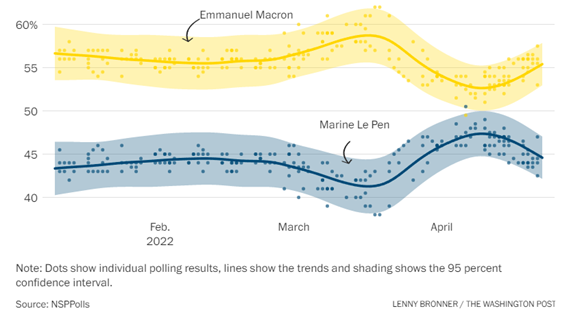 A Le Pen victory could have represented real risks to investors. Despite her campaign’s concentrated effort to soften her hard-right image and broaden her appeal to more voters, she was still intent on implementing policies squarely at odds with the EU’s core tenants, namely reducing freedoms of immigration in the EU and religious expression. This, at a time of heightened economic and political risks in the EU’s two largest countries, France and Germany, could have rattled investor’s confidence in the EU and the Euro. In the chart below from Geoquant (which measures political risk for France and Germany), we see while Germany’s level of political risk has risen more dramatically–likely due to its proximity to the Russia/Ukraine crisis and reliance on Russian gas and oil–France still had a higher risk score.

Given the greater risk to the EU, investors hedged the possibility of a Le Pen victory. Analysts had pointed out that a Le Pen victory could see French and EU stocks drop in general, and also cause a blow to the Euro, but that a Macron victory could result in a “relief” today. When Macron’s victory was confirmed Sunday, the Euro, as expected gapped up in Asia trading from Friday’s after-hours session. In the chart below the Blue regions denote the Asian trading sessions which, on Monday April 25, saw the Euro bounce after Macron’s election. (Green represents European and Orange represents American trading hours). However, the Euro quickly reversed that move and proceeded to drop. With Macron representing stability in the face of risks to the EU represented by Le Pen, why would the currency now drop?

In fact, the Euro had already faced headwinds in the context of the US Fed raising rates and the possibility of an EU recession made more likely by the Russia/Ukraine conflict. After its initial bump in the Tokyo trading session following Macron’s victory, which likely included short trades being covered after Le Pen’s loss as well as the closing of hedge positions, the Euro turned down again.

China, the EU’s biggest trading partner, is currently facing further mass lockdowns in its capital Beijing, which will likely add to supply chain woes and global growth worries. A cloud of uncertainty looms large over Germany, which is particularly exposed to further Russian oil and gas sanctions. Furthermore, Macron, despite his solid victory on Sunday, must now wait to see the results of the parliamentary election in June to know if he will have a friendly government that will allow him to govern effectively.

Despite Macron’s victory, after a quick respite, the Euro lost out against a multitude of challenges that have now carried it close to a two year low.