A couple weeks ago, in our quarterly strategy report (see: QSR-Has Innovation Bottomed?), I argued that it appeared that innovation had bottomed. I showed the following chart, which is maintaining its September 21, 2022 low, highlighting the quintile spread of the S&P 500 on the R&D/Sales investment factor. 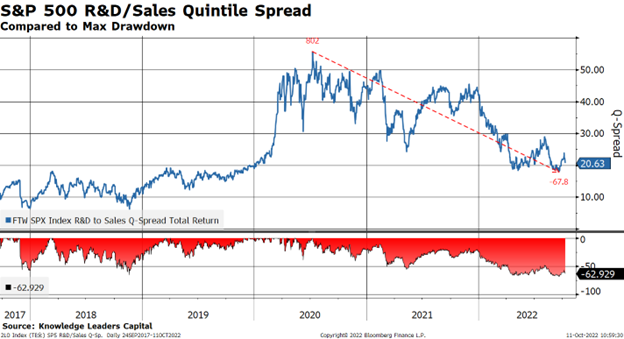 Digging in a little deeper, we sifted through this first quintile of the S&P 500 for other insights. We brought back data for R&D, Market Value, Trailing 12M Net Income and Trailing 12M Operating Cash Flow from Bloomberg. We then calculated valuation metrics based on reported income and cash flow. We also calculated adjusted valuation metrics by adding R&D back to net income and cash flow. Recall, it was SFAS #2 in 1974, where FASB mandated the expensing of intangible investments like research and development. For these companies in particular the accounting method where capital expenditures are capitalized while R&D must be expensed is somewhat ridiculous because in aggregate these companies spent $367 billion on R&D in the last 12-months while they spend $224 billion on capital expenditures, a $143 billion difference.

Among the 80 companies that comprise the first quintile (quintiles aren’t equal groups, i.e., there are more companies in some quintiles than others because some companies do no R&D) the aggregate reported Market Cap is $10.5 trillion. Reported earnings for the trailing 12-months in aggregate are $465 billion and operating cash flow is $668 billion. This yields a median P/E of 27.89 (based on sorting largest to smallest market cap) and P/CF of 22.56.

I make a simple adjustment to illustrate the importance of considering R&D as an investment and accounting for as such by adding it back to net income and operating cash flow. When I do this the picture changes dramatically. The R&D-adjusted median P/E is 18.67 and the median R&D-adjusted P/CF is 18.67. These metrics are 43.4% and 36.14% discounts to reported valuation respectively.

The market has derated significantly in the last 10 months, while innovation has been derating for close to 22 months. Currently, at an aggregate adjusted P/CF of 10.22, the S&P 500’s most innovative companies seem downright cheap.

Our conclusion in Part 2 of this analysis of the most innovative companies is the same as Part 1: they appear cheap and have stopped underperforming their less innovative peers.