In this exercise, I am going to use the Morningstar Developed Markets Large-Mid Index. I remove any companies that are domiciled in tax havens (Bermuda, Luxembourg, etc.). I also am going to focus on Europe and Asia, excluding Canadian and Mexican companies from the analysis. So, we have left companies from the Developed Europe and Asian countries. The table below summarizes the data we’ll be referring to.

These international companies spent, in aggregate, $354B on R&D in the trailing twelve months relative to $322B in capital spending. The non-R&D spenders generated about $417B in net income in the trailing twelve months and $532B in operating cash flow, according to Bloomberg data. The group of R&D spenders, which is about 39% of the total universe of equities considered here, generated an adjusted net income of $906B and adjusted operating cash flow of $1.09B. The “adjustment” here is simply adding back R&D investments to net income and cash flow, treating corporate investments in R&D similarly to corporate capital expenditure. 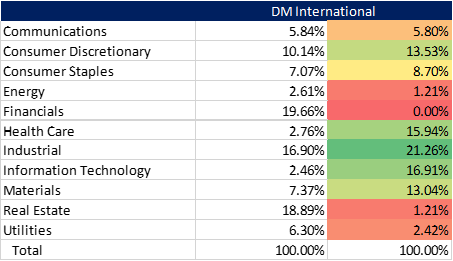 Next, I wanted to look at the distribution of R&D spending among US companies relative to international. The table below summarizes the results.

While many investors maintain a homefield bias and relegate investments to the US, they are missing huge pockets of innovation around the world. Whether it is European industrial or Asian consumer staples, there are many companies outside of the US technology sector that spend heavily on R&D. Considering these international innovators allows one to construct a globally diversified portfolio of the most innovative companies.